Today in São Paulo, as in many cities across Brazil, people took to the streets to protest and complain about pretty much everything they could think of – but mostly how government corruption and mismanagement is eroding Brazil’s economy. The demonstrations scheduled to start at 14:00 on Avenida Paulista drew, based on the most recent reports, a million to the street, many dressed in the colors that represent the country – yellow, green and blue.

On Friday, there was also a demonstration in favor of the current party. However, the crowds came in a very different manner than today. The unions, supportive of the current government that allows these organizations many benefits, bused in (alleged) members from all over and even gave some a stipend of R$30 to cover any “expenses” they might incur on the trip. Today, while there was representation from all points in the city, many wandered over from the near neighborhoods of Jardins and Higienopolis, representing the upper and upper-middle classes, who were willing to come out on a Sunday and support change. (Let’s face it, they have the most to lose in terms of real monetary value, right? I mean, when your dollar isn’t good at Disney anymore… it’s time to hit the streets.)

In addition to putting out the Workers Party (PT) as well as Dilma herself, there was even a showing of support for military intervention. 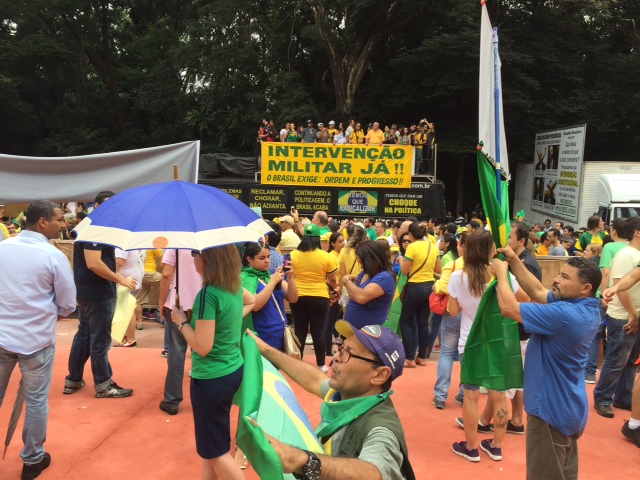 Now, I’m not much interested in living through a military coup, so I’m hoping there are better strategies on the table. But a frightening thought.

What made this demonstration much less frightening to me, as I tend to veer toward worst case scenario when it comes to unhappy crowds, is somebody was offering up cupcakes.

I don’t care what anyone says, if cupcakes are present, it’s a party, not a protest. Ok, a party against a party.